Gean’s from Brazil, and Xoe Joanna’s from the UK; we were married in 2018 in Chile. We’d come mainly to visit Xoe’s family, longstanding sailors then cruising the South American coastline, and we weren’t planning a wedding initially. But it wasn’t easy for either of us to marry a non-citizen in our own country, and we found it was much easier to be married in Chile. We invited all our local acquaintances at short notice. Three months later, we travelled south to do a boat delivery; we were without our own vessel back at the time. It would be a lucky decision to do this delivery. 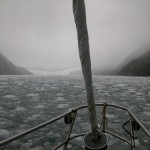 We left Valdivia, where we’d had the ceremony (a lively riverside city, and famous for its craft-beer excellence). Arriving via coach in Puerto Natales, we set off through the uninhabited channels perforating Chilean Patagonia. After a month amidst the glaciated summits and glacier-smoothed valleys, we traversed the Beagle Channel to reach Puerto Williams on the Atlantic side. This small town is the world’s southernmost one.

We noticed an abandoned boat moored in the bay; being told it might be for sale, we emailed the owners briefly. We continued with our journey.

Our destination was Brazil (Xoe still hadn’t met Gean’s family). We hitchhiked thousands of miles through South America, crisscrossing the Andes continually along the way. We waited days by endless roads in Argentina’s steppes, and camped on the shores of the numerous lakes of Chile. We made more friends throughout this adventure.

When we’d been six months in Brazil already, we were asked to buy the boat now behind us by such a distance. So our little tent is not now our only home.

As we motored into Puerto Williams following a four-week delivery, Gean looked around at the different vessels there. Some were familiar from his earlier visits, but one he’d seen elsewhere. He’d met its Belgian skipper in Argentina previously.

Recalling this, Gean said: ‘What’s happened to it since?’ The boat was in a dented and derelict state.

We soon discovered that the yacht had been beached, a year before, in an isolated caleta nearby. A rope trapped around the propeller had disabled the engine, a common occurrence. On snapping its anchor chain in a storm while sheltering, the boat was washed ashore and was stuck for a week, being pulled off by a passing charter craft finally. And then came the sadder end to these sad events; it happened that the owner died subsequently. His boat thus became his relatives’ property.

This was the yacht we’d buy eventually, a steel yawl by Van de Stadt, built in the seventies. Its likely future was to be claimed by the navy when its papers expired shortly. We purchased it before this could take place.

We called the boat after a Bowie tune, Space Oddity.

While living in Williams, and restoring and repairing, we came across some unwanted puppies under a house. Though hesitant at their German Shepherd mother’s size, we brought one aboard to grow into a guard-doggy. His mum was known as Laika after the first animal in space. Her son’s Zibby for another Soviet space-puppy.

Zibby’s fond of sticks, and of swimming – and scaring burglars, of course. Hopefully.

Born in Williams, same as Zibby, Nya became fourth crewmember six months subsequently. The local vet convinced us we had room for a really tiny kitty. Nya was a few weeks in age, weighing 60 grams at the time. She’s named for an old space-cat meme.

Nya likes to kill stuff, often toes, or the tail of the doggy. Her job’s just to be fluffy.

Space Oddity at one of Patagonia's remote glaciers in the northern branch of the Beagle. There's a bit on the blog now about our Beagle sailing journey (link on my profile).
The aft deck of our boat always looks a bit of a mess, but not sure why we have a fender hanging out in this picture. Caleta Olla in some rather rare sunshine.
Sailing in these conditions Gean wears a floater suit constantly, pretty warm as well as providing buoyancy! Never seem to find one that isn't huge on me...
The inside of a glacier in the Beagle (noisy with each point of ice dripping constantly, it's very echo-y)
Follow S/Y SPACE ODDITY on WordPress.com
Create your website with WordPress.com
Get started
Loading Comments...
Comment
×