When we bought Space Oddity we had plans to sail to Brazil and then haul the boat there, somewhere better equipped than here in the remote south of Chile; but it became clear we’d have to do something about the weeds on the bottom anyway, or we wouldn’t be travelling too speedily. We decided to haul in Puerto Williams eventually; then the start of lockdown shut down such ideas for a while. We were able to haul in late April, once restrictions had relaxed partially. This left the last of the early-autumn sunny days, after which the weather turned wintry. END_OF_DOCUMENT_TOKEN_TO_BE_REPLACED

Autumn’s my favourite of the seasons of Patagonia, the nothofagus trees creating incredible colours here, and the weather less wet than in summer (and warmer than winter, of course). Quarantine’s meant we’ve been a bit less busy, so I shot some pictures this time, mostly while walking the doggy. These leaves are falling as we enter May.

The red colour descends from the higher hillsides, because of the colder air there

In April the autumn colours predominate

The forest is nothofagus about entirely, though there are subvarieties apparently

Chilean fishing craft in front of the Beagle

Colours coming down the hillside

The trees are at their brightest for a week or two only, before the leaves turn brown and blow away

This last summer the loan of a friend’s 4×4 allowed us to travel outside of the Puerto Williams city, something for which not all visitors find the time, and hike in the rest of almost-roadless Isla Navarino.

Picnic by the Beagle

Camping near Caleta Eugenia with the kitty

A friend in the forest near Caleta Eugenia

Bbq by the riverside

Swinging on the shores of Navarino

Nya climbs at Eugenia as a baby

Crossing the Río Ukika via a fallen tree

Shells in a pond in Puerto Williams area

The news of the Covid-19 disease, and then the first cases of the disease, seemed to reach South America somewhat behind Europe or North America. UK friends were filling Facebook with coronavirus memes before we could appreciate these fully, and Brazil’s president’s supporters still suspect the communists of inventing the whole story, even after the US president has reluctantly started to advise that everybody stay inside. Here in Chile, as perhaps in other places, the news and the first cases formed a start from which the rest escalated rapidly. One day the neighbour’s saying it sounds like it’s only some sort of a cold really, the next he’s shouting through a mask from two metres away. END_OF_DOCUMENT_TOKEN_TO_BE_REPLACED

Last Monday (9th of March) Puerto Williams had a dramatic day, by the standards of this little isolated city: a number of orcas chased two whales onto the shores, and went on to kill them eventually. Orcas are seen in the area rather occasionally, and while whales are common in the channels of Chile, they don’t often enter the bay. They tend also not to be sei whales as these ones were, being the smaller humpbacks normally.

END_OF_DOCUMENT_TOKEN_TO_BE_REPLACED

Conditions didn’t allow the Desafío Cabo de Hornos race to reach the Horn itself this time; instead boats competed in the Beagle nearby. Click to view photos individually.

‘Ata ‘Ata celebrates the start of the race

The Argentinian boats Unicornio and Serendipia

The X-50 has won both versions of the regatta

Calms and rainsqualls on the first day

Cool Change (US) disturbing the birdlife

Some of the fleet shelters for the night in Margarita

The start of a leg off Puerto Toro

Kzar, a Joshua from Ushuaia

Beating outside Toro in the Beagle

The fleet occupies the pier at Puerto Toro

Patagonia waits for wind on the last day

Ypake on the last day

Serendipia in front of Cool Change 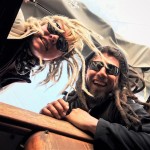 With the start of 2020, our arrival in the Cape Horn province, which was I think 6th of January, is now a year behind us already. END_OF_DOCUMENT_TOKEN_TO_BE_REPLACED 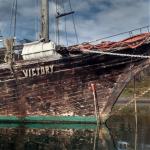 Tied to the Pontón Micalvi, the stranded naval vessel that acts as dock in Puerto Williams, are boats of two varieties, all moored onto one another in rows with the last to arrive outside. There are the charterers, with their trips in the summer to Cape Horn or to Antarctica, and there are the cruisers, stopping for a few months at the tip of South America before they turn north from here. But one yacht’s never left Micalvi in the years we’ve known the place, innermost boat in the innermost row throughout that time, next to Micalvi with six visitors outside. END_OF_DOCUMENT_TOKEN_TO_BE_REPLACED

It doesn’t seem so long since we last left for Argentina, at the start of winter, our first trip in our semi-repaired Space Oddity. Three months later, when the frosts were thinning and the snows were falling less frequently, the same visa-related reasons compelled us to repeat the journey. Which was a problem for our ever-expanding German Shepherd crossbreed Zibby, whom we’d adopted after the first trip as a six-week-old puppy. END_OF_DOCUMENT_TOKEN_TO_BE_REPLACED

Through the seasons in the world’s southernmost city, Puerto Williams, Chile. END_OF_DOCUMENT_TOKEN_TO_BE_REPLACED